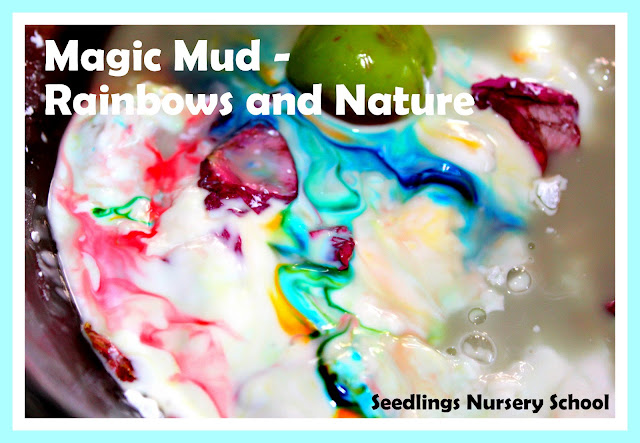 Ahhh, Magic Mud, aka goop, gak, slime, and all of those other interchangeable words used to describe a variety of amazing sensory materials for children (and adults!).  At Seedlings, Magic Mud is what we call cornstarch and water.  I've tried this a couple of times with my students and received a very unenthusiastic response each time - it's one of those love it or hate it kind of things.  I've seen this solid-ish, liquid-ish material used in some wonderful ways, but two of my favorites are Clubhouse Goop over at Fit Kids Clubhouse - check out the rainbow swirl action over there!  AND, Multi-sensory Goop at Growing a Jeweled Rose - who doesn't love nature in their sensory play?

When my son came home with a handful of rose petals from our Parent-Child Class at the local Waldorf-Inspired school, I thought - why not combine both ideas and see what happens?? 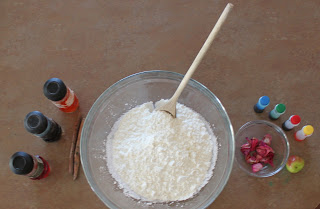 I started him off with a whole box of cornstarch, his nature finds - rose petals and a teeny apple, food coloring and some old spice bottles with food coloring and water.  I also gave him a pitcher with more water since I knew the spice jars wouldn't be enough to get the reaction we were looking for. 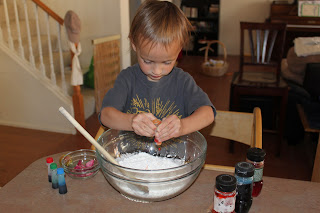 He started with the food coloring.  He described his process as he was going along, "First I'm going to do this, Mom, then I'm going to add blue."  Such the little chef! 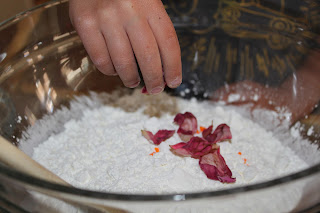 A sprinkling of rose petals looks lovely!  He really did sprinkle, I was pretty impressed with the technique, I could tell there was a lot of love going into this recipe. 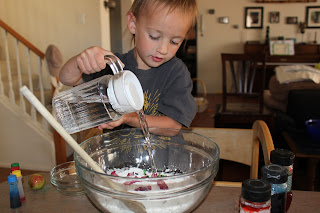 Then he discovered the pitcher of water.  Remember all those drops of food coloring earlier?? 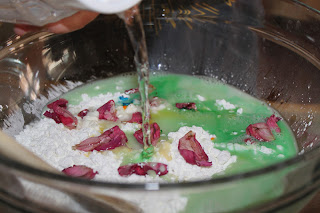 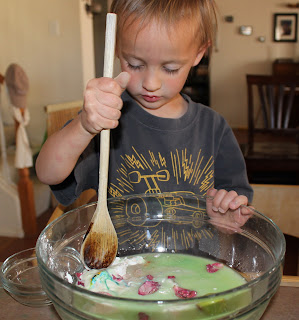 Now for a quick stir.  "Mom, it's hard!!"  I thought at this point, he might get discouraged, as he usually quits stirring once it gets difficult when we're baking.  I was wrong, he just kept adding things, even the little apple. 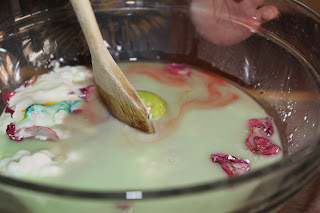 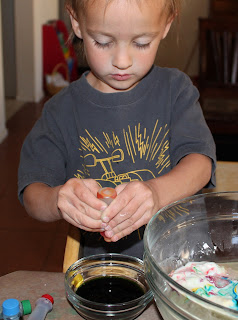 This next part was the best for me to watch.  Instead of adding things directly to the bowl, he created a variety of mixes in the small bowl and then added them.  I'm pretty sure this comes from watching Daddy cook - he loves being his own sous chef and puts everything into little bowls before starting any recipe. 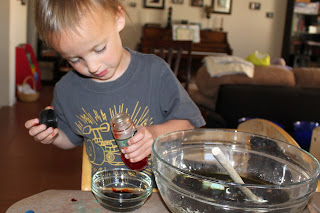 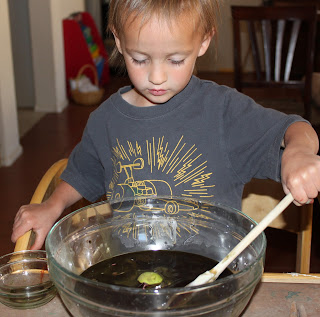 He was still having trouble mixing, so I suggested he find another way to mix. 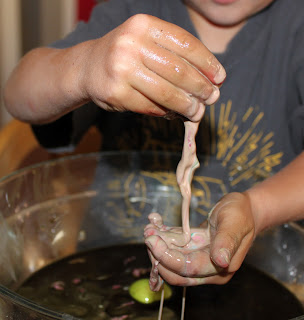 And then he made a new discovery.  At the bottom of that greenish-brownish liquid mess, was this amazing stuff, still retaining it's original rainbow colors!!  Hey, it IS called MAGIC Mud! 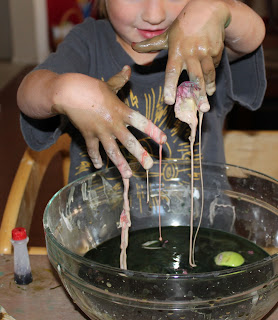 He mixed and manipulated until the mixture was homogeneous and not very magic anymore - which is what happens if you add too much water - but it took quite a long time to get there.

My lil guy's verdict: LOVE IT!

Hopefully, you'll love it too! 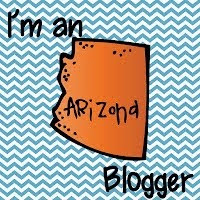